This week we have had a very special time bringing our 'Bright Lights, Big City' topic together. We had a Royal Tea Party with some very delicious looking cakes and we did have a visit from the Queen! She gave us a Royal wave and we showed her our curtsey and bows too!

We have read the Christmas story and talked about what happened and why. We have had our Christmas dinner whilst wearing our crowns and listening to Christmas songs.

We watched a special iRock Christmas performance and joined in by dancing!

Finally we had our Christmas pantomime to watch too- why not ask us all about it!

In topic this week we have investigated and compared other capital cities around the world, as well as finding out all about Kuala Lumpur in Malaysia. We recapped on what a city is and what you will find there, we also then thought about the similarities and differences between Kuala Lumpur and London.  We also learned to sing ‘London’s Burning’ in rounds!’

The children thought about what they head learned so far this term and did a piece of writing all about London, focusing on what their favourite landmark is, what makes London a city and the different tourist attractions in London.

In maths this week we have been consolidating our learning on comparing number bonds and also finding the difference through subtraction.

On Thursday afternoon, the children took part in a wonderful virtual experience using headphones. They were guided through a story which involved the Queen being kidnapped! The children then had to solve the mystery by touring the capital cities of the United Kingdom! Please see the photos below.

The children have been consolidating their learning in French of numbers to 10 and basic greetings.

In design and technology, we did some deeper learning about the Shard in London. We focused on the shape of the building and learned about its history, we then became architects ourselves and designed our own houses.

The final week of term two has rolled around very quickly! In the last week we look forward to our royal tea party and hope to expect a visit from the ‘Queen’. We are also watching an online pantomime- Jack and the Beanstalk and the school iRock performance, as well as lots of other lovely Christmas celebrations, including Christmas dinner!

In maths we have been comparing groups of objects using the language greater than, less than and equal to. We took this learning further in the week by then comparing our teen numbers using the symbols of < > = and then ordered them too.

We have been using positional and directional language to get us around London from one landmark to another! We have used forwards, backwards, left and right in particular and used a grid map to do this.

We researched on the London tourist website the top 5 things to do in London.

In science we investigated 'how leaves change' once they have fallen off of a tree and used the word 'decompose'. Why not look at some leaves at different stages when you go for a walk.

Watch out for our Christmas Performance on google classroom coming next week. We have enjoyed putting together our poem and singing!

In maths we will be consolidating our learning from this term and practising fact families and using a number line to find the missing number.

We will be joining all of our London learning together to write a full piece all about London, what is there and the fact that we have learnt it is a city and why.

We will compare London to another city somewhere else in the world.

In maths this week the children have been learning to count forwards and backwards to twenty and write these numbers as words as well as digits. We also focused on identifying the amount of tens and ones in two digit numbers and counting one more and one less. Please see the photos below.

Our science lesson this week focused on leaves where we posed the question ‘Are all leaves the same?’. We focused on being able to name the 4 parts of a leaf and notice some similarities and differences between different leaves. We then recapped and reasoned if a leaf is from a deciduous or an evergreen tree.

Learning in maths next week will focus on comparing groups of objects and comparing numbers, we will then order groups of objects and order numbers. In topic we will be giving directions and thinking about tourism. And in science, we will think about how leaves change. We will also be performing our Christmas performance – remember to watch the children in action as the performance will be uploaded to Goggle Classroom.

In maths we have been learning about 2D and 3D shapes and their properties. We will then use these shapes later on in the week to make repeating patterns.

We have learnt the 6 different parts of a tree and what their job is too.

In topic we have really  been thinking about Geography. We thought about typical weather for the season as well as learning about London and writing facts we have learnt. We have also been looking in detail at the London Landmarks too.

We have talked about Anti-bullying week and being 'United' against bullying in our Jigsaw lesson this week.

In PE we are continuing with our 'Jungle' dance.

In maths we will be focussing on tens and ones in a 2 digit number. As well as London from a birds eye view!

In maths this week learning has been focused on finding the difference through subtraction, and comparing addition and subtraction statements. The children have been working hard through practical and writing activities to understand these maths concepts and use the subtraction and equals signs correctly. Please see the photos below of the children hard at work.

Our topic of ‘Bright Lights, Big City’ is now in full swing! The children have been busy thinking about what a city is and what makes a city. We have found out that a city has a cathedral, lots of buildings, shops and people and usually has a river running through it. We also looked at human features in our local environment and made our own maps of the local area, thinking about the locality of nearby features, such as Asda, Boundary Park and Costa.

In science this week we learned about different types of tress, learning the meaning of ‘deciduous’ and ‘evergreen’- ask your child if they can explain the meaning of these words to you! The children then had a go at sorting a selection of leaves into the two different categories.

In PE this week, the children have continued to focus on dance and combine different movements.

In our daily phonics lessons we are continuing to learn and use sounds in words and write sentences.

On Wednesday in our RE lesson we continued to think about Christmas and how this is celebrated and on Friday we learned about the celebration of Diwali.

In our Jigsaw Jack session, we asked the children to notice differences between themselves and discussed how having differences and being unique is great thing!

In maths we have been learning all about subtraction. We have learnt to recognise the symbol - and how to put this in a number sentence. We have used the crossing out method and a part whole model to help us. See below for examples and how you can continue to support this at home. 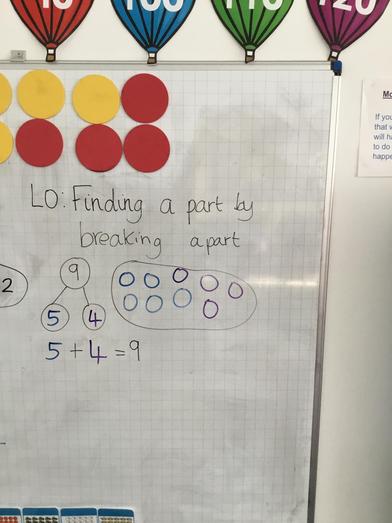 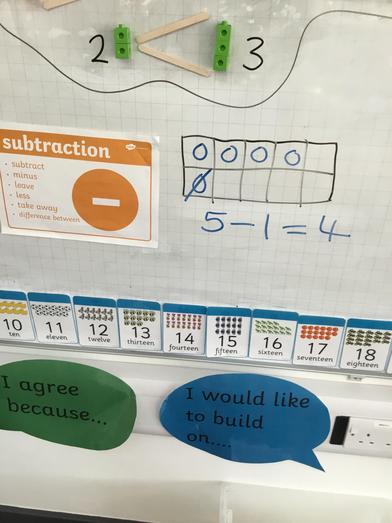 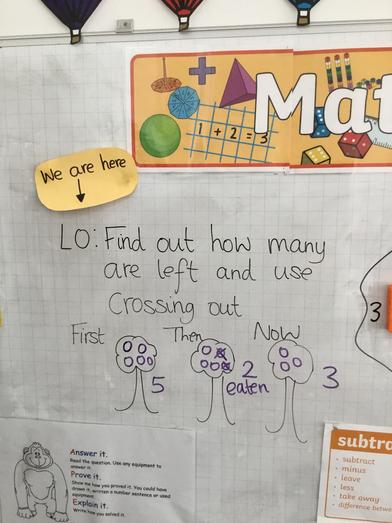 We have introduced our new topic Bright Lights, Big City this week which is all about the city of London. We have explored some landmarks and the Queen has invited to us a Royal Tea Party which we will be attending later this term- we do hope the Queen isn't too busy and can come!

We have taken our topic learning on further by looking at where London is on a map. We looked at a UK map and named the 4 countries and then found out London is the capital city of England. Why not ask us to show you our body dance which helps us locate the 4 countries! We have also explored the physical features of the UK, recognising features such as hills, coastline, flatlands and rivers.

In science we looked at how the seasons changed and focussed on Autumn, naming September, October and November as the three months of Autumn.

In RE we listened to the Christmas Story and thought about why Christmas is important to Christians and their beliefs.

We also started French this week and learnt basic greeting such as hello and goodbye.

In maths we will be continuing our work on subtraction. In PE we will develop our jungle dance and in topic we will be looking at cities in more detail.

We have been playing a game in maths to warm up our brains and if you would like to play at home go to 'Top marks, hit the button' and explore number bonds to ten.